The Aurora Quest in Denali is not to be missed! Search the skies for the Northern Lights and learn about Mother Nature's fireworks with your knowledgeable Alaskan guide. This 3-hour narrated tour will take you to one of the best places in the world for Aurora viewing. PLEASE NOTE: THIS EXCURSION OPERATES AUGUST-SEPTEMBER ONLY.

Enter the legendary Arctic Circle and search for the elusive Northern Lights with this evening tour out of Fairbanks. This laid-back van tour into the Alaskan Tundra is sure to be a favorite for you and your family.

Be inspired under the dancing Northern Lights in Alaska's Golden Heart City! This 4-hour aurora tour will take you to the Ski Patrol, located at Ski Land in Fairbanks for a private aurora viewing experience. PLEASE NOTE: THIS TOUR IS ONLY AVAILABLE ON MONDAYS, WEDNESDAYS, AND FRIDAYS.

Get ready to go to some of the best Aurora Viewing Lodges in the area, giving you a great chance to see the Northern Lights in comfort, warmth, and safety.

Soak in the warm waters of Chena Hot Springs before chasing the beautiful Northern Lights. Visit the world-class Fairbanks Aurora Ice Museum and enjoy your greenhouse-to-table dinner. Our local guide will take you to the heated traditional yurt where you can sit back and hunt for the Aurora! PLEASE NOTE: THIS TOUR IS ONLY AVAILABLE ON TUESDAYS, THURSDAYS, AND SATURDAYS.

Experience Alaska in an all-inclusive 3-hour experience! First, embark on a thrilling adventure with your dogsledding team through the frozen utopia. As you mush along the trail, watch the sky dance the night away. After your dogsled ride, warm up in the Mongolian yurt, view the majestic Aurora Borealis, and listen to stories of the off-grid life with dogs.

What are the best Alaska Northern Lights tours?

The best Northern Lights tours are:

Where is the best place to view the Alaska Northern Lights?

Fairbanks, Alaska is considered the best place in the United States to view the Aurora Borealis (Northern Lights), though you can also see them from Denali. The Fairbanks Arctic Circle and Northern Lights Tour and Denali Aurora Quest are our most popular tours in each port.

What is the best time of year to view the Northern Lights?

The best time of year to view the Northern Lights in Alaska is August through April, when there is less daylight, though they occur in all four seasons.

How much time should I spend chasing the Northern Lights?

What else should I expect?

Chasing the Northern Lights is a quest for night owls. Most tours operate between 10pm and 3 am. Plan to stay up late, sleep in late (which is easy to do because there isn’t a lot of daylight in the winter), and then spend your afternoon on one of our awesome Fairbanks tours before you take off on your quest for the night.

If you're chasing the Northern lights from Denali, you can read our guide to find more things to do in Denali National Park.

What should I wear on my Northern Lights tour?

What is the best way to get to Fairbanks to see the Northern Lights?

You can get to Fairbanks by plane, car, or (in some months) train.

Anything else I should plan for my trip?

If you’re adding on a Northern Lights journey to your Alaskan Cruise in August or September, we have a huge collection of shore excursions to keep you busy.

If you’re driving or flying into Anchorage, check out our Anchorage Tours and Denali Tours to add-on to the beginning or end of your journey. You can go dog sledding, try an ATV tour in Denali National Park, or go exploring in Anchorage. 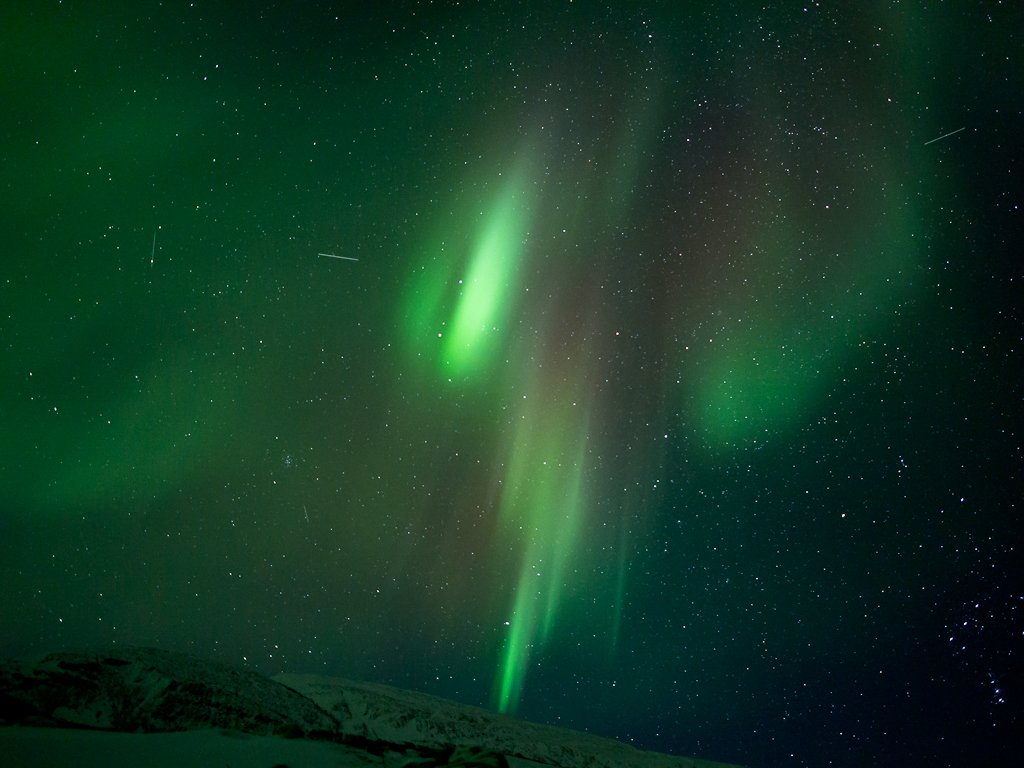 There is nothing more beautiful and magical than the Aurora Borealis. As if something from a fairy tale, the idea of looking into the midnight sky and being greeted with the sight of vivid colors swirling around the atmosphere almost seems too good to be true, but it is possible! Here you will learn what exactly these elusive lights are, where you can find them, and get the tools you need to search for them on your own. Click here for our best Alaska Northern Lights tours.

In order to understand how to seek out these elusive lights, there are a couple of things that we have to explain. Let’s start by answering the most important question, what are the Northern Lights? The answer to this question might be a bit more complicated than you think, but it is important to understand if you want to go hunting for the aurora yourself.

What are the Northern Lights?

The Northern Lights or the Aurora Borealis is the name for the phenomenon of lights that shine in the atmosphere at the north and south poles.

More specifically, the light from the aurora comes from electrically charged particles from the sun colliding into the elements of the earth's atmosphere. The more they collide, the more energy they create, and they release that energy by emitting light.

The reason why the aurora only occurs at the north and south magnetic poles is because the electrons from the sun travel along magnetic field lines that concentrate in those poles. 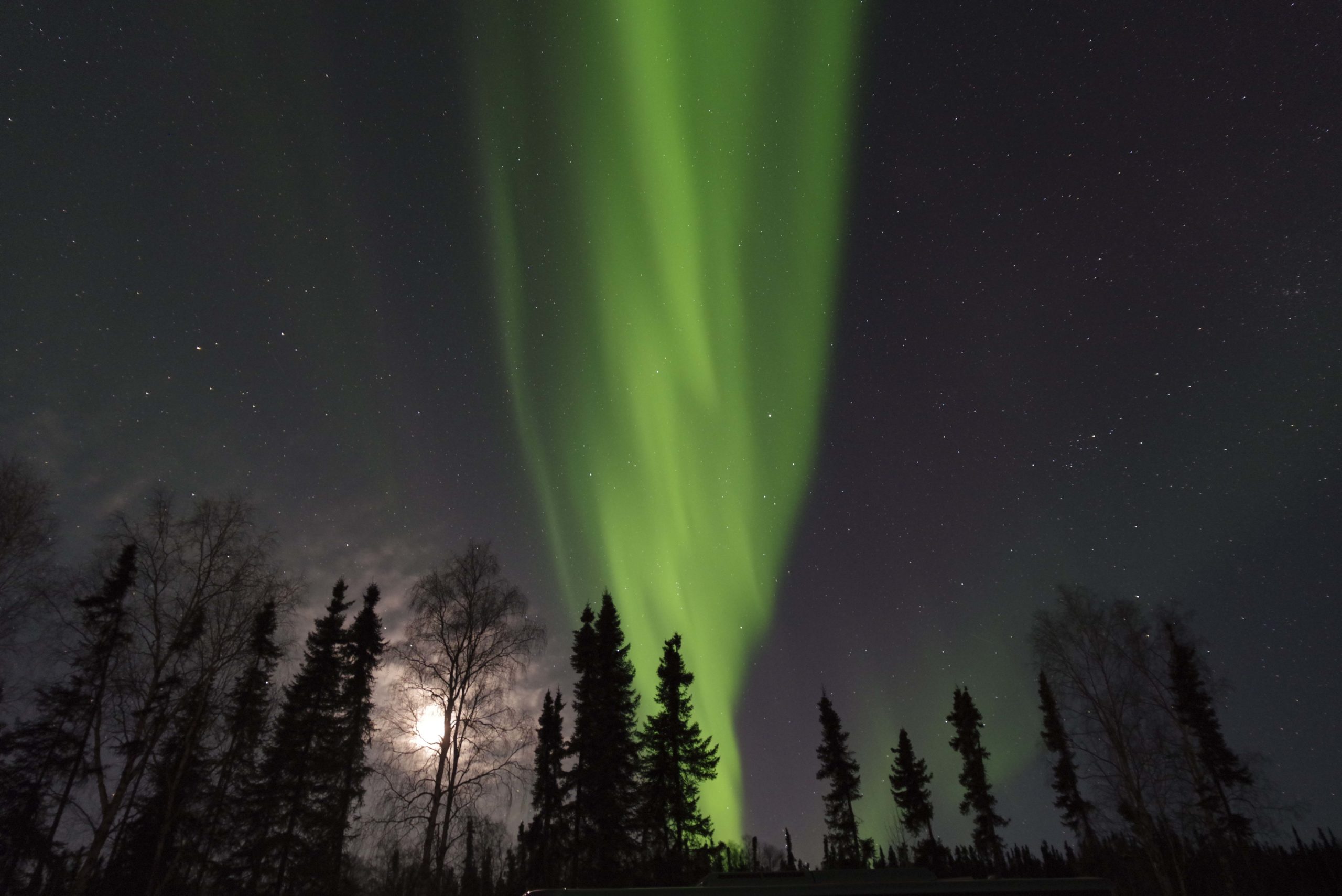 Where can I see the Northern Lights?

Because the aurora is a solar event it is a rare weather phenomenon. But, don’t let that intimidate you. Just like the weather, the aurora can be forecasted using scientific data making it easy to see when there is a higher chance of a bright and vivid aurora. We suggest taking a look at the Geological Institute of Alaska’s forecast here: https://www.gi.alaska.edu/monitors/aurora-forecast

The first thing to know about reading the aurora forecast is that the daily measurements are on a KP Index which is on a scale from 0-9; 0 being no activity and 9 being the most activity possible. The higher the KP Index rating for that day, means the higher chance of seeing a vivid aurora!

When looking at the Geological Institute of Alaska’s aurora forecast you may notice that there are 3 different forecast timelines, 1 hour, 3 day, and 27 day forecasts. This is because the National Oceanic and Atmospheric Administration’s Space Weather Prediction Center’s Forecast Model is updated every 30 minutes. The hourly forecast is the most accurate, however, it’s only helpful if you are already in a spot where you can see the northern lights.

The 3-day forecast is the second most accurate as it takes roughly 3 days for the particles from the sun to travel to the surface of the earth.

However, for travel purposes, the most helpful is the 27-day forecast. It takes 27 days for the sun to make a complete rotation. Because of this, if there is a high amount of activity on one day it is likely to reoccur once the sun has rotated to the same position in 27 days. This is called Carrington Rotation!

In the northern hemisphere, most auroral activity has been shown to consistently appear in an oval shape over the top of the earth. This band called the “green ribbon” covers many regions from Alaska, Greenland, to Norway! Those located in this oval are able to see the aurora consistently at a KP rating of 2 when the conditions are right. When the KP rating goes up, the aurora can be seen at a further distance.

If the sky is cloudy, snowy, or rainy, you will not get a clear view of the aurora in the atmosphere. The perfect night would be clear of clouds, a nice dark sky, and minimal noise and light pollution. The moon also plays a large role in the visibility of the aurora. Due to the light it reflects, it can overpower the aurora. If you are looking for the perfect nights for northern lights viewing, it is best to catch the moon while it is in the new moon phase when it is completely dark.