Alaskan Fish Species and Their Life-Cycles

The most well-known of Alaskan fish is the salmon. There are actually 5 different types of salmon that are abundant in Alaska, all of whom share an exciting (for fish, anyway) anadromous life cycle that takes them from their birthplace in a freshwater stream, out to the ocean for the bulk of their lives, and then back to their natal streams where they spawn, and then die - providing their natal streams with vital nutrition, as well as continuing the species.

Most salmon eat insects, invertebrates, and plankton in their youth; and then include other fish, squid, eel, and shrimp. (The sockeye, however, sticks to almost entirely plankton.) They live an average of 4 to 5 years, most of which is spent in the open ocean.

Alaska’s official state fish is the Chinook salmon, also known as the King salmon. It’s the biggest of the 5 types, coming in at 36 inches and up to 30 pounds. Adults can be distinguished by the black irregular spotting on their backs, dorsal fins, and tail (caudal) fins. In the ocean, they have bluish-green coloration on their backs, which fades to a silvery color on the sides. In freshwater, their colors range from red to copper to deep gray depending on where and how old they are.

Chum salmon are found throughout the state and are the most widely distributed salmon in Alaska. They are also called “Dog salmon” due to the pronounced canine teeth that the males develop during spawning, not, as many locals claim, because they are tasteless and only worthy of feeding to the dog. (Though, in Arctic, Northwestern, and Interior Alaska, chum salmon are highly prized as a traditional source of dried winter food.)

In the ocean, they are metallic bluish-green along the back with many tiny speckles, smaller in size than the King’s. Back in freshwater, the males drastically change in appearance, developing purple to red wavy lines along their sides. They are, on average, 24-28 inches and 10-13 pounds.

Our third species, Coho salmon, can be recognized in the ocean by their lack of spots, and by their white gums. (Kings have black gums.) They usually weigh 8 to 12 pounds and are 24 to 30 inches long, but much bigger Cohos are known to be caught as well. Though all species of salmon jump on their return journey, upstream, to their natal rivers––Cohos are especially known for it and can jump over 6 feet in the air.

Pink salmon are the most numerous, as well as the smallest Alaskan salmon, at 3.5-5 pounds, with an average length of 20-25 inches. While in the ocean, they are bright greenish-blue on top and silver on the sides with small scales and pink flesh. When spawning, males turn brown to black on their backs with bright white bellies, as well as developing a very large hump. For this reason, locals usually refer to them as “humpys” or “humpbacks”.

Our final salmon, the Sockeye, is most known for it’s delicious, firm, bright-orange flesh. But before it hits the dinner table, while still in the ocean, they are silver with metallic green-blue tops, giving them one of their nicknames, “blueback”. When they return upriver, their heads take on a greenish hue, males develop humps (though not as pronounced as Pinks), and their bodies turn brilliant red––giving them their other common nickname “red salmon”. A final nickname is “Kokanee” which means “red fish” in the indigenous language, but it only applies to land-locked Sockeyes, who aren’t able to get to the ocean. 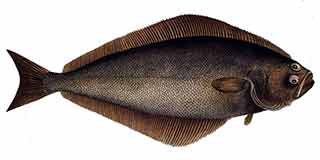 Next to salmon, the most beloved of Alaskan fish has to be the halibut. These are enormous fish, at up to 8 feet long and 500 pounds. They are also delightfully peculiar-looking: they are flattened, and actually swim sideways! (“Flatfish” is a common nickname.) Both of their eyes are on the top side, which is usually grey to brown with spotting marks that help them to blend into the sandy or muddy floor below. Both eyes are almost always on the right side of the top, but about 1 in 20,000 have both on the left.

Halibut actually start life in an upright position like other fish, with an eye on each side of their heads. The left eye moves to the right side of the head when they are about one inch long. They live for about 30 years, with males maturing at 8 years of age, and females at 11.

They feed on plankton the first year of their lives, and then move on to small shrimp-like crustaceans called euphausiids. As halibut grow, they start to eat all kinds of things: herring, sand lance, capelin, smelt, pollock, sablefish, cod, rockfish, octopus, crab, and even clams. They can be found in most of Alaska’s marine waters, as far north as Nome.

In addition to being very heavy and long, they are also very wide––up to 5 feet. This gives large halibut the nickname of “barn doors”. Small halibut are called “chicken”, guesses are abound to why, but nobody really knows. But one thing is for sure––they make spectacular fish ‘n chips. 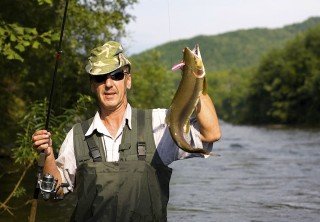 Relax and spend a few hours away from the crowds while on this fishing expedition. We'll supply everything you need, so there's nothing for you to worry about except for having fun and taking in nature at its best. There will be no shortage of fish in the cool, clear streams we'll take you on this trip. 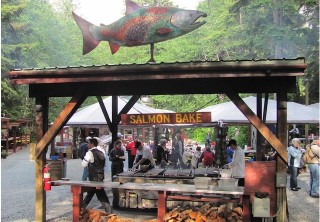 **THIS TOUR IS NOT AVAILABLE FOR THE 2023 SEASON** Experience the perfect day sightseeing at the most popular attraction in Juneau, the Mendenhall Glacier, followed up by an all-you-can-eat Alaskan salmon bake. Take in the magnificent sights during your free time at the glacier before being taken to an authentic Alaskan feast at Gold Creek. Spend as much time feasting, exploring, and enjoying the entertainment before heading back to your cruise ship.